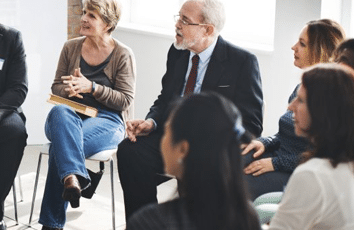 Little pastoral care in the period before she died

Anna tells the story of her sister Sinead who developed kidney problems which needed dialysis for all of her life. Anna became Sinead’s primary carer. Eventually, Sinead’s health had deteriorated to the extent that she was reaching the end of her life. Bute some problems with occurred – ‘One day she did a dialysis exchange after which she got MRSA – she was in hospital for nearly 5 months’. After this, Anna feels that some of the health care team could not face up to the issues. ‘Sinead died steadily between 2003 and 2008. And she died hard. By 2007 I could see she was failing. They could not talk to us about end of life. I think that they just did not want to lose her because some of the team had worked with her since she was a child’. This failure continued – Sinead moved to a high dependency unit in 2008 where Anna had a confrontation with a consultant ‘I said to the consultant she’s dying… The consultant asked “Well you tell me what she is dying of [because it didn’t show up on the tests]". But I said “I’m her sister not a doctor. You tell me what she is dying of…"

Anna says there were other distressing incidents ‘for instance one night a confused old man climbed into her bed – she was terrified because she couldn’t move physically… we refused to leave her alone in the hospital then, and I think that maybe we were regarded as being the ‘bad (awkward) family.’

The attitude of some staff left a lot to be desired. Once, Anna was publicly criticised for gaining entrance to the ITU–’When I went in, the nurse saw me and came across the ward…and she raised her voice to me and was quite aggressive about coming in without permission, [even though a doctor had invited her in].’There were other examples. ‘One evening Sinead was actually bending over in pain. The nurse was trying to support her to cope with another half hour of dialysis.’ Sinead said to Anna ‘I can’t do this anymore’. Anna said ‘It was too late – we were saying she can’t take it – we are saying no – what part of no don’t you get?’ Anna was very concerned at this lack of listening and the failure to recognise the gravity of her condition – ‘I was looking at a potential suicide. Sinead did not want to end her days hooked up to machines, but this is what happened. Nobody could talk to me about palliative care. She is facing end of life and no one is talking to her (or me) about it.’

The end was coming close – ‘She was getting sicker and sicker and then she plateaued for a while. I had to go to abroad but then I was told to get home fast. She had slipped onto a coma by the time I arrived, and we never saw her again. I then had to make the decision about withdrawing treatment and this happened without her own consultant being there. He would not talk about Sinead dying.’

Anna felt that interaction with her at the very end was insensitive. ‘When they were turning down the noradrenalin the nurse who was doing it was chewing gum as she spoke across Sinead… then they asked me to step outside to discuss a post-mortem while she was still alive. When I was outside with the consultant, one nurse was discussing what she was doing that night. Also while my sister was still alive they were talking about a post-mortem in the middle of this busy ward. The discussion about a post-mortem should have been done after her death and not in an open hospital ward.’

When Sinead eventually died, there was little sensitivity around family needs. ‘It was very, very hard. Lucky it was a Saturday, because there was a 2 day delay in doing the post-mortem and that was the only time we had to come to terms with what happened. Sinead was at the heart of the family and, quite apart from direct family, we had a load of foster kids who had seen Sinead as a key part of their lives. They didn’t get to say goodbye.’

‘Anna feels that end of life treatment was not handled professionally. ‘This is their bread and butter every day, but to us it is one of the most traumatic experiences of our lives.I had to pick up the pieces for my family afterwards and no one ever came to ask us how we were.’

Lessons to be learned ….

Some parts of the system and some people were very helpful – ‘Not all of it was awful. For example, the dialysis nurses that came down to our home for the funeral were wonderful. Anna also feels that MRSA is a complex issue and she doesn’t harbour blame for it. ‘The MRSA that Sinead got, I’d say that it was waiting to happen and that it is a global issue. The MRSA just finished her off.’

End of life care was slow to happen and was handled badly. ‘When she died there were brochures for ocean cruises with dialysis services! She was a … woman who loved life and it seems that, no one actually thought that she might die. What did they think, that someone with an illness like Sinead’s was going to live forever? There is a failure to deal with issues relating to dying. ‘There needs to be a more open attitude about terminally ill patients …, and not have a fear of failure, or whatever it was.’

For Anna, insensitivity was at the heart of the negative experiences that she had. ‘They need to have awareness all the time of the patient and family. And death has to be handled more sensitively. After Sinead died I got her stuff back in a yellow bag. I know that this has changed since then.’

Anna also notes the failure of services to listen to her about the severity and nature of Sinead’s illness. ‘I wasn’t listened to, I think because they are so busy. I don’t think they are unkind people, I think they would have sat down if they had the time to do it. But if you have 10 people doing 20 people’s work this is what you are going to get.’

Another point Anna raises is that many clinicians do not face up to the issues of death and dying. ‘The consultant did not want to see that she was dying. He thought that he should do everything to keep her alive, that this was his role, but now it was time to let go.͛ More generally, Anna thinks that ‘every hospital should have a hospice ward for a start. Politeness and courtesy are not an add-on. It is a part of the culture that we are supposed to care.’

Structural problems need to be addressed. ‘In ICU, we have to be very careful of burnout. We have high octane situations with high octane workers. I see this with some of my own students. Some of them have to be in on the drama. We do need people like that, dynamic people who will not collapse under the pressure and we need those workers.’

There is a need to have a pastoral role and perspective in the care team: ‘We need to have someone else on the team, but someone who is involved all of the time who can stand back and soften the situation. We need someone to oversee the pastoral care.’ She goes on ‘there is a disjointed system – maybe we need a patient advocate, or someone who has been through it, or we need a new role. It is an issue of the balance of the clinical team. It needs someone who is being human about it.’

Anna also feels there is a need to improve how the system deals with mistakes. ‘The system doesn’t learn from its mistakes, because they are afraid. There is a fear of negative consequences if they admit mistakes.’

Another issue for Anna is the almost exclusive emphasis on the patient. She feels that a more holistic approach is needed – ‘the treatment is focused mainly on the person who is ill, not on the family or carers or significant others. However, the person who is ill is relying on the family or the carer to take them where they need to go, whether it is out of hospital or to let go.’