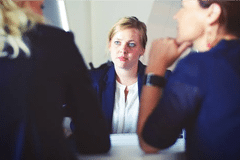 Eve and her Mum’s Story

Eve and her Mum (Paula) – their story:

12-year-old Eve had recurring ear infections; became very unwell
During 2010, twelve-year-old Eve had recurring episodes of ear infection. A few days before Christmas that year, her mother, Paula, brought her to Accident & Emergency at Hospital A. The doctor she saw diagnosed an ear infection and prescribed antibiotics. Over Christmas, Eve was very nauseous and experiencing dizziness. On New Years Eve, she was very unwell. She was unable to dress herself or do anything, and had double vision, so Paula took her back to A&E in the same hospital. This was midmorning, when A&E was very quiet with only 4-5 patients.

Doctor in A&E wouldn’t listen; dismissed Eve’s symptoms as ‘attention seeking’
Unfortunately, they had a very unsatisfactory and distressing experience with the doctor (registrar) there. Initially he even refused to see them at all. Paula and Eve were in a curtained-off cubicle and could hear the doctor talking to the nurse outside. Aloud, and in front of everybody else, he was saying things like ‘she was already seen, I don’t want to see her, why should I see her….she has been diagnosed with anear infection, hasn’t even finished the antibiotics, why should I be doing this’.

They heard the nurse trying to cajole him, again in front of everybody, ‘ah, do it for my sake, do it as a favour to me…..she has a little bit of double vision’. Eventually, as a favour to the nurse, he came in to seethem, but his attitude seemed to be that he couldn’t be bothered, had made his mind up before he saw them and that they were wasting his time. He looked in Eve’s ear and said there was still infection there and to finish the antibiotics. Paula asked about the nausea and double vision, and felt it should be obvious that Eve was quite ill as she had to help her from the chair to the bed. But the doctor dismissed
this, saying,

‘I think a little bit too much television… looking at her phone, and i also think getting a lot of attention from her mum’

Although Paula believed that the doctor was negligent in his manner and diagnosis, she did not say anything at the time for fear of antagonising him and the ramifications this might have for Eve’s care. But it was awful ‘to have a doctor saying no, I’m just not dealing with it …I don’t know whether it was because it was New Year’s Eve or his last day in ENT at that hospital, I don’t know…he just decided he wasn’t going to deal with her…you know…’ On the way home Eve was crying and very upset, saying she was not looking for attention, even though Paula tried to reassure her that she knew she wasn’t.

Horrific few days with nowhere to go for help
As it was New Year’s, Paula then had to wait until January 2 to get an appointment for Eve with her GP. On the night she brought Eve home, Paula slept next to her, on the floor in her bedroom…’I was so scared, so scared…because I thought maybe she had a tumour …and you feel completely isolated, totally on your own, just kind of pushed away…no one to go to…At the time I didn’t think of going to Hospital B [other hospital] because of the [experience at] Hospital A, you know, no one’s going to listen to me…it was absolutely horrific, it really was …We also knew that Hospital B did not have an ENT speciality so didn’t think they could help us’.

GP appalled; referred them to another hospital…. The GP was appalled when she saw Eve and heard their experiences with the doctor at Hospital A. Paula ‘felt like a paranoid Mum’ but the GP said ‘no, you know your daughter, keep going…’ She said they would just have to skip that hospital (even though it had the ENT speciality), go to Hospital B instead and get a different team to work for them. So they went to A&E there, hoping they would get somewhere. …. where Eve was diagnosed with a life-threatening condition, and care was excellent Luckily enough they did. The young registrar (who looked to Paula like he had just made his Confirmation!) said ‘kids don’t make up stuff about headaches and double vision, so there is something causing it…an ear infection won’t cause that…..’. He phoned a consultant and they admitted Eve. The following morning she had an MRI scan and it showed a 3 to 4 inch transverse sinus thrombosis (clot in her head, in the sinuses) which was putting pressure on the optic nerve. Ironically, the ENT team from Hospital A then came up to Hospital B to see her. Again, Paula didn’t mention their awful experience at Hospital A, even though she knew that the particular registrar they had seen at Hospital A had by then gone to another hospital. She didn’t want to risk antagonising the consultant as she was trying to get him to help.