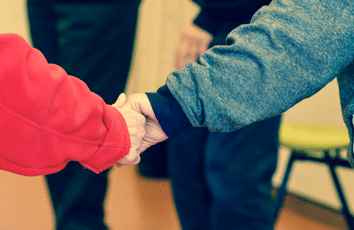 Mark and his family – their story:

Difficult journey through mental health services, with little consideration for the family

About fifteen years ago, 15-year-old Mark was brought to an A&E department with a range of psychological symptoms. After some time he was diagnosed as having schizophrenia, and that this was brought on by drug abuse. For his mother, communications were very traumatic. She was told that ‘he had paranoid schizophrenia’, there was a ‘75% chance of him committing suicide’ and there was ‘nothing that she could do for me’. Medication was also problematic: ‘the first time I brought him out he was so doped up that he was drooling and he couldn’t speak. …. I thought that if this was the quality of life he was going to have for the rest of his life, he would be better off dead’.

Mark sometimes needed A&E services in the last 15 years. Problems occurred: ‘Attitudes from some registrars are poor in relation to getting a separate room away from the main area to help in maintaining the dignity of the patient. They could cause disruption while waiting as they are very unwell’. The ‘refusal to admit patients leaves the responsibility for coping with patients behaviour with the carer, often when they have little or no knowledge of medications, for example. This is a danger to all’.

GP services were also problematic: ‘the GP did not know enough about mental health as he said he only had 6 weeks training in psychiatry’. When she rang the hospital to get him assessed for the first time she was told that ‘she was an over-reacting mother’ over the phone. Eventually she got an appointment which ended up as an involuntary admission and Mark was subsequently hospitalised as an in-patient for 6 months.

Psychiatric services provided further difficulties. One issue was the inconsistency between psychiatrists in terms of emphasis on medication. When Mark decided to change his psychiatrist, there were different approaches to him. Every time he became uncompliant it was known as a ’blip’ and no emphasis on finding out the cause of why he was not taking his medication. Psychiatrists ‘were more concerned about drug levels than psychiatric symptoms or behaviour’. On three occasions, Mark went missing from a semi-secure unit. Once he turned up again only through his own initiative. He was not missed by staff for 5 hours, even though he could be a suicide risk.

Gaining access to services during relapses was often a challenge, sometimes needing dramatic measures. Once, Mark had to be made homeless before he could receive appropriate treatment – ‘I had to put him into a homeless shelter to get service …. They gave him many life skills – they were the life saver’.

Care plans were also an issue. ‘Families should be present with the patients consent, but this was not always the case’. Care plans were often be deficient. Continuity of care was also a problem. ‘A lot of team doctors do not read up on notes prior to interviewing the patient. Discontinuous treatment, poor handover between doctors (registrars)’.

The carer can have a key role in supporting people, but often they have no formal role: ‘Patients should be made aware that they can have a carer with them in the early stages as this would facilitate communication and treatment. We live with this all of the time and we are not educated in how to recognise problems and how to deal with them’.

Families and carers should be involved in care plans and treatment from the beginning of treatment…. ‘Education, support and knowledge of how to cope with a crisis – this should be part of a care plan, even where the patient has reached the age of 18…..’ ‘The patient is the primary service user, but the family unit is the ‘secondary service user’.

Families need to be assessed following the diagnosis of mental illness. They have both needs and potential resources to bring to bear: ‘the family could have been assessed, what are their needs and resources in the context of the diagnosis?’ … ‘If every carer who has a person with a mental health problem refused to take them back into their house, what would the HSE do?’

Much of the treatment that Mark has received has been medication oriented. There is a reluctance to reduce medication to a minimum, especially where there is perceived stability in the patient’s condition: ‘at one stage he was on 7 drugs. Eventually he was being kicked out of the housing services he was receiving until his medication was changed. This took extraordinary efforts’.

Mark has wanted to reduce the drug dosage, but there can be little support for this from psychiatric services: “your levels are great, and you are doing well so you are better off staying with this dosage, why rock the boat”. ‘Mark wants to get down to the least amount of drugs possible. He knew he was prepared for it … but dosages have to be discussed first with the team and then they decide to reduce the dosage or not. This should be Mark’s choice as who else knows his body better than him – he should be encouraged to do so at safe levels’…. ‘Reductions are possible…. although complete reduction of drugs in some cases is not an option, a review system on the diagnosis should be put in place every few years.’